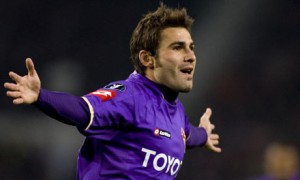 Adrian Mutu has said that beating Liverpool in Europe will be no big deal and the Fiorentina striker said that he can fire the Italians to victory in the Stadio Artemio Franchi tonight.

However Mutu said that once upon a time, beating Liverpool would be a famous win and you could make a fuss, but no more.

He added that since joining Fiorentina, the club and the whole environment have grown to the point where the team can now beat anyone in their stadium.

Mutu, age 30, was infamously sacked by Chelsea in 2004 after failing a drugs test and admitting to taking cocaine. He faces a worldwide ban unless he pays Chelsea £14.65million in compensation this year.

He said that his time in England was not easy as he was young and faced a lot of troubles.

He revealed that he is a better player now, more mature and much stronger physically.

The former Chelsea striker added that he is sure that he will not make special plans for Fernando Torres or Steven Gerrard, as that is not the team’s style.