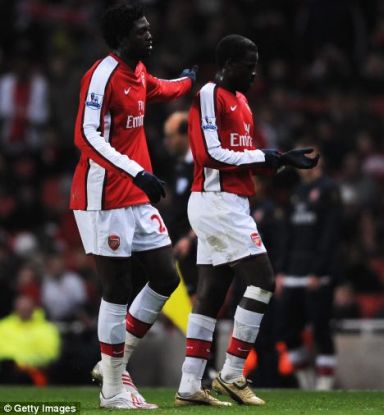 Sensational football news are out and it has been revealed that Fiorentina coach Cesare Prandelli has said that he would love to have Arsenal right-back Emmanuel Eboue among his squad for next season.

La Viola have been linked to Eboue since the Ivory Coast international revealed last month that he could leave the Emirates Stadium after growing frustrated by his failure to hold down a regular starting spot.

His name was mooted as part of a possible swap deal involving Felipe Melo before the midfielder secured a move to Juventus and Prandelli has told reporters that Fiorentina are still very much in the hunt for Eboue, who can also play in right midfield.

The manager also revealed that he is not going to look at other positions because first the club wants to evaluate what it has in order not to make the slightest mistake in the market.

He also added that the club have to make targeted moves and Eboue has the characteristics which the club is definitely looking for. He also said that he wants to attack a lot on the wings and he needs players who are good at forcing their way through and with good technical skills too.

He went on to say that Eboue has a stand-out driving force and the manager does not want to think about other roles at the moment, also because Eboue is not their player yet.

Eboue moved to Arsenal from Beveren in January 2005 and became a first-team regular in the second half of the following season however, inconsistent form has seen him overtaken by French defender Bacary Sagna and English winger Theo Walcott in the pecking order.

The 26-year-old was also booed by the Gunners fans back in December after coming off the bench against Wigan and was himself substituted.