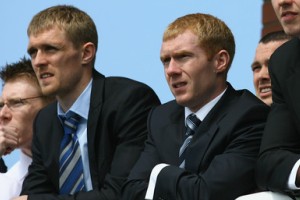 Darren Fletcher has said that Manchester United veteran Paul Scholes has plenty of years left in his 34 year-old legs.

Fletcher told reporters that : “It’s a formation we’ve played in Europe a few times over the last few years, and it’s one I enjoy.”

Fltcher then said : “It’s always a pleasure to play in the same midfield as Paul Scholes – his ability to control a game is second to none, and I think he can carry on doing a job in the middle for the team for a number of years yet.”