Reports are out claiming that Roma attacker Gervinho has touched down in China. 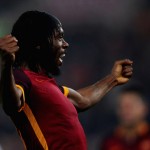 Gervinho is set to sign for Hebei China Fortune.

The former Arsenal man is thought to be moving for €15m.

“I remember it from the Olympic Games in Beijing in 2008, it’s very nice and close to the sea. I like it.”