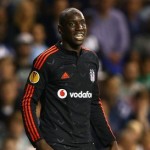 Reports have emerged claiming that Besiktas striker Demba Ba is being linked with a return to England.

The former Chelsea striker only left for Turkey last year.

New West Bromwich Albion boss Tony Pulis is also understood to be interested in a move for the former West Ham, Newcastle and Chelsea striker.