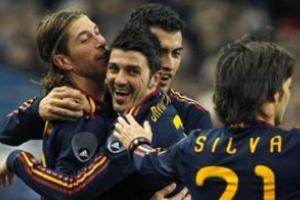 Spain gave further proof of why they are one of the favourites for World Cup glory this summer after seeing off France in Paris to continue their phenomenal run of form.

The Euro 2008 winners deservedly clinched their first win over their northern neighbours on French soil since 1968 thanks to first-half goals from David Villa and Sergio Ramos.

Wednesday’s friendly victory also means Spain have now won 42 – including two after extra-time – of their last 45 fixtures, with their only defeat coming against the United States at last summer’s Confederations Cup.