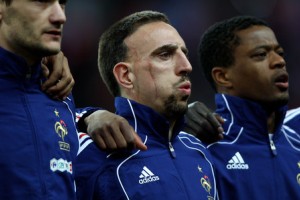 Bayern Munich star Franck Ribery is being urged to choose Barcelona ahead of Real Madrid.

Yesterday, Ribery denied an agreement with Real Madrid, insisting he also was keen on Barcelona and Premier League side Chelsea.

It has been reported that Ribery’s France teammates Thierry Henry and Eric Abidal have been working on him, urging the winger to make the move to the Nou Camp.

It is also believed that Bayern teammate Arjen Robben, the former Real winger, has told Ribery he’ll get lost among the stars inside the Madrid dressing room.