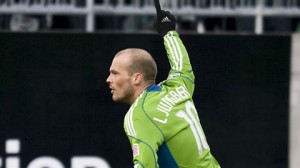 Seattle Sounders star midfielder Freddie Ljungberg has been reported to be in London this weekend for talks with Arsenal over a possible loan transfer.

Swedish newspapers have reported that Ljungberg wants to move to the Gunners in January on-loan and is holding talks with manager Arsene Wenger.

Ljungberg, who joined Seattle this season from West Ham United, could be offered a short-term deal by Wenger or allowed to spend the MLS’s off-season training with the first team squad.