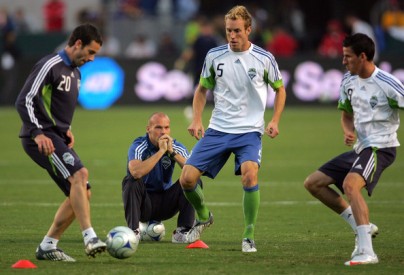 Swedish international midfielder Freddie Ljungberg has revealed that he wants a loan move back to Arsenal and the former Gunner is expected to meet Emirates boss Arsene Wenger this weekend.

Ljungberg, now playing for MLS side Seattle Sounders, would join in January until mid-April in a similar deal to David Beckham’s with LA Galaxy and AC Milan.

It is believed that Arsene Wenger has remained in close contact with Ljungberg, now age 32, since he left Arsenal for West Ham two years ago.

Ljungberg, who made 216 appearances for Arsenal, flopped at Upton Park because of injury problems but hip surgery in the US has left the Swede pain free for the first time in years.

It is also reported that Chelsea also wanted Ljungberg as cover for the African Nations Cup but the transfer ban has blocked the move.