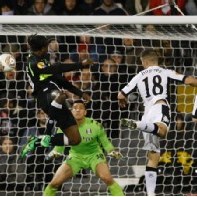 Fulham crashed out of the Europa League tonight after substitute Djiby Fall secured Odense a draw deep into stoppage time.

The Cottagers started the 14th European match of their mammoth season knowing victory over Group K’s bottom side would secure a place in the final 32.

Excellent work down the left flank by Kerim Frei resulted in a low cross to Bobby Zamora, whose lay-off was finished by Clint Dempsey.

Four minutes later Mousa Dembele wriggled free and found Frei with a through ball, which the 18-year-old nonchalantly popped through Stefan Wessels’ legs.

However, Fulham capitulated in the second period as Hans Henrik Andreasen’s low free-kick and Fall’s last-gasp header saw them drop out of the competition.