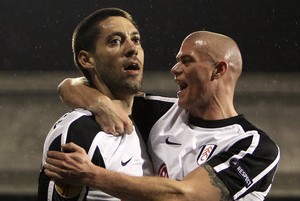 Clint Dempsey wrote himself into Fulham folklore by firing the Cottagers into the last eight of the Europa League with a 4-1 win over nine-man Juventus at Craven Cottage.

Dempsey drifted a sublime chip past keeper Antonio Chimenti to seal a historic 5-4 aggregate win for the Cottagers.

Bobby Zamora cancelled out David Trezeguet’s opener before Fulham surged into a 3-1 lead on the night thanks to two goals from Zoltan Gera.

Juventus had been reduced to 10 after Fabio Cannavaro was sent off in the first half and their fate was sealed in the 82nd minute thanks to Dempsey’s winner. Juve’s misery was completed by the sending-off of Jonathan Zebina in injury time.