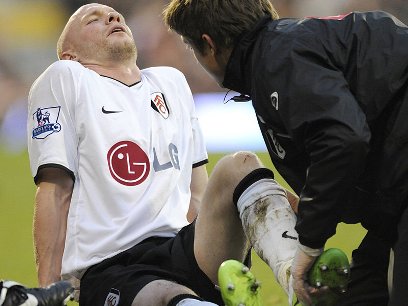 Furious Fulham boss Roy Hodgson has blasted the challenge that has left striker Andy Johnson out for up to eight weeks with a dislocated collarbone.

Hodgson was livid after Amkar Perm defender Dmitry Belorukov executed a cynical body-check that left Johnson sprawled on the pitch in the second half of Thursday’s 3-1 Europa League play-off victory.

Hodgson said that it was a good win against a difficult team but the game has been marred by the unbelievably blatant challenge on Andy Johnson which has resulted him to dislocated his collarbone and put him out for a long time.

He added that in these times when referees are supposed to be clamping down on challenges, a challenge like this happens and it is only punished with a yellow card and the team lose a player for eight weeks.

He also added that he believes that there’s no doubt the defender should have been sent off and that committing blatant fouls will not only stop someone from going one on one with the keeper, but also put them in hospital, there’s a good chance you’ll get a red card.