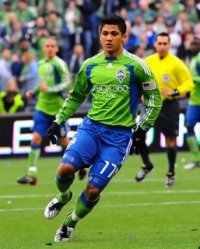 Fulham has been relatively quiet in the transfer market but now reports are surfacing that the club is keeping tabs on Colombia striker Fredy Montero.

The 21-year-old striker who plays his club football in the USA with Seattle Sounders, has scored nine goals in his last 15 games and has been in impressive form.

Montero has already won three caps for his country and had a trial with Real Betis last season.

Fredy’s father was a policeman. He is the oldest of four children, with two sisters and one brother, who currently plays for a university in Colombia.

Fredy is currently on loan from Deportivo Cali.