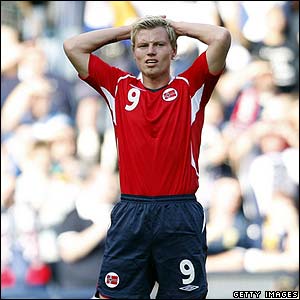 Latest transfer news are out and it has been reported that Fulham FC have signed Norwegian midfielder Bjorn Helge Riise for an undisclosed fee from Lillestrom. He is the younger brother of former Liverpool defender John Arne Riise.

The 26-year-old, who earned his first international cap last year, joins Roy Hodgson”s side on a three-year deal as he becomes the third Norwegian on the Cottagers’ books, along with giant centre-back Brede Hangeland and striker Erik Nevland.

The former Standard Liege player told the club website that it was a dream come true for him to have signed for Fulham and that he is looking forward to joining the team for pre-season training now that the agreement is complete.

He also added that he obviously knows Brede and Erik very well from the national team and that they have only good things to say about the club.

He also said that Fulham had a fantastic season last year under Roy Hodgson, the manager whom he admire very much.

The player also added that Hodgson’s record in Scandanavia speaks for itself and that he is very excited about working with him over the coming months and to being part of Fulham at such an exciting time.

Riise’s elder brother, now playing for Roma, almost joined Fulham in 2001 but opted for Liverpool instead.