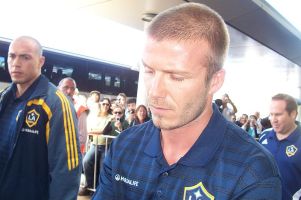 It is believed that the LA Galaxy star flew in from London but was held up by customs who searched his bags after landing.

A close source to the player said that the 34-year old midfielder was not at all happy with the way he was treated by airport security.

The source said that David Beckham was not pleased at all and he ranted at airport security.

It is also believed that Beckham even asked his handlers to do something but there was nothing they could do.


Beckham Turned Down Arsenal And Liverpool