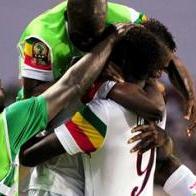 Mali eliminated African Nations Cup co-hosts Gabon 5-4 penalties in their quarter-final after the two sides had played out a 1-1 draw in Libreville.

Seydou Keita scored the decisive kick after Gabon’s talisman Pierre-Emerick Aubameyang had his effort saved, the only player to fail in the nail-biting shootout.

The shock loss for Gabon, who were just six minutes from success, left some 40,000 at the new stadium in the capital silent while Mali celebrated unlikely progress.

They now meet the highly-fancied Ivory Coast in the semi-final in Libreville on Wednesday.