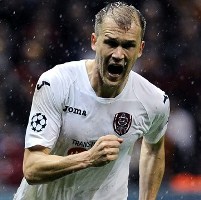 Galatasaray claimed the first point in their Champions League campaign as they came from a goal down to draw with Cluj in Istanbul.

However, it could have been even better for the Turkish side, who missed a first-half penalty and still have it all to do to dislodge their opponents tonight from second place in Group H and progress to the knockout stages.

It was a frustrating night for the hosts, with Dany Nounkeu putting through his own net to give Cluj a 19th-minute lead before Felipe Melo missed the penalty 10 minutes before half-time. Galatasaray dominated the second half and got their reward through Burak Yilmaz 13 minutes from time but they could not force a winner.