Reports are out claiming that Galatasaray have informed West Ham they must buy Burak Yilmaz. 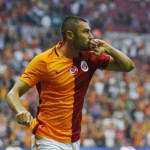 Sky Sports says Galatasaray are only keen on a permanent deal for striker Yilmaz.

West Ham have offered a loan deal but the Turkish club and the player, who would cost between £7m and £8m, are not keen on that.

Hammers boss Slaven Bilic has admitted his interest in Yilmaz this season.