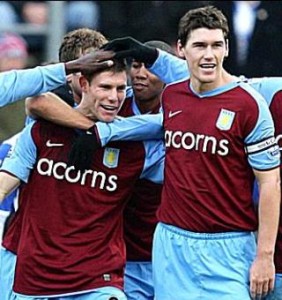 Milner told reporters that it is up to the fans to decide what sort of reception to give Gareth Barry but hopes that the former player gets a good reception. However Milner said that it is down to each individual.

The midfielder added that football is all about opinions and everyone thinks differently about teams and players.

Milner added that he can only say what he feels and said that Barry was a great player for Aston Villa and that he did a lot for the club.

Milner also added that Barry played for the club for a very long time and served the club brilliantly.

He added that obviously Barry a top quality player, and has come through the ranks and that it is not only about what he has done but it is about the help he has given the other young players coming through who have had the chance to learn off him.

Milner ended by saying that he certainly learned a lot off Barry and that as a player, Barry gave great service to Aston Villa.