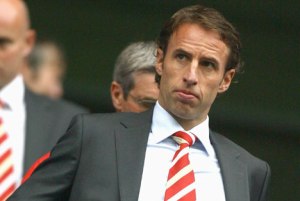 Gareth Southgate was sacked last night, just an hour after leading Middlesbrough to within a point of the top of the Championship.

But with just 17,459 fans at the match, the lowest League crowd ever at the Riverside, chairman Steve Gibson lost his patience.

Falling gates have been a real concern for Gibson and with large sections of the Boro faithful turning against Southgate, the time had come for change.

Gibson said that it has been the most difficult decision he has had to make in all the time he has been in football.

He added that Southgate has given Middlesbrough Football Club magnificent service as a skipper and, in very difficult circumstances, as manager.

Southgate was appointed as manager for Middlesbrough after Steve McClaren quit for the England post in June 2006.