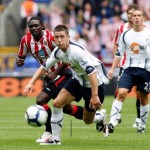 Bolton boss Gary Megson believes that defender Gary Cahill is on the brink of an international breakthrough.

The 23 year-old, former Aston Villa player has been drafted into England boss Fabio Capello’s recent squad but has yet to win his first cap.

However Megson said that the England under-21 international has got such high standards that he deserves a lot of credit and that he is absolutely delighted with Cahill.

Megson also said that he is convinced that Cahill can make it to the World Cup finals and whether Cahill is as good as John Terry, Rio Ferdinand and Matthew Upson at the moment is something to be argued. Megson however said that Cahill is much quicker than some of them.

Megsin also went on to say that in his own age group, Cahill is head and shoulders above everyone else.