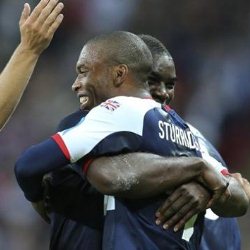 Great Britain sealed their place in the quarter-finals with a 1-0 win in Cardiff that knocked Uruguay out of the Olympics.

With Ryan Giggs dropped to the bench, Craig Bellamy took over the captain’s armband and was a rare shining light in a poor first half. Uruguay had chances, but it was the British who opened the scoring as excellent work from Joe Allen resulted in a tap-in from close range for Chelsea striker Daniel Sturridge.

Knowing that a draw would be enough, Team GB held firm in the second half, although Liverpool striker Luis Suarez should have brought the teams level when he danced past the defence only to fail to beat goalkeeper Jack Butland.

With Uruguay pushing late in the game, Sturridge had a great chance to double the lead with a curling effort on the break, but a place in the knockout rounds was already assured and South Korea await.