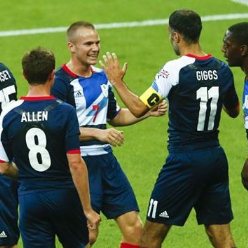 After Ryan Giggs had become the oldest goalscorer in Olympic history, GB required a rather more youthful duo to drag them out of a hole after Rashed Eisa had equalised for United Arab Emirates.

Sinclair was scoring with his first touch, although it is perhaps Sturridge who has more chance of featuring in next month’s squad for the friendly against Italy in Berne, especially if he impressed Hodgson with his superb chip 14 minutes from time.

The result got GB back on track to secure a quarter-final berth, although they will almost certainly need to avoid defeat against Uruguay at the Millennium Stadium on Wednesday to seal their knockout berth.