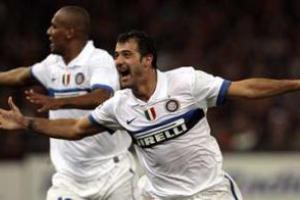 Esteban Cambiasso opened the scoring at the Stadio Luigi Ferraris, Mario Balotelli added a second and a stunning Dejan Stankovic volley from the half-way line effectively settled the outcome of the match before half-time.

Substitute Patrick Vieira made it four after the break and Maicon added a gloss to the scoreline with a fifth to send Jose Mourinho’s side three points clear at the top of the Serie A table, at least until their nearest rivals Sampdoria play at Lazio on Sunday.

Genoa stay fifth, six points off the pacesetters, but stand to drop down the table should results on Sunday go against them.