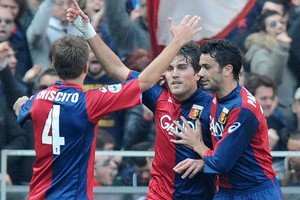 Genoa saw of Cagliari in an eight-goal thriller at the Stadio Luigi Ferraris to move back into contention for a place in Europe next season.

Daniele Dessena put Cagliari ahead in the 16th minute, but Alberto Zapater equalised from the penalty spot in the 36th minute after the home side had already been denied four times by the woodwork.

Rodrigo Palacio put Genoa ahead in the 39th minute, but their joy was short lived as Daniele Conti equalised immediately.