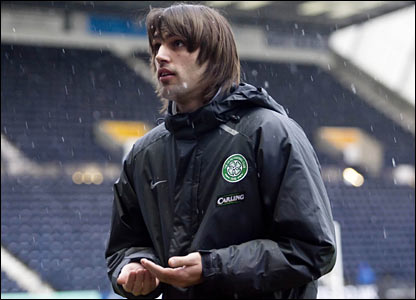 Celtic striker Georgios Samaras hopes that his scoring performance against Premier League club Tottenham is enough to convince new manager Tony Mowbray to grant him a starting place against Dinamo Moscow on Wednesday.

It is said that Greece international striker is behind Scott McDonald and new signing Marco-Antoine Fortune in the Parkhead pecking order despite helping secure the Wembley Cup in Sunday’s 2-0 win against Spurs.

Celtic will be playing their first competitive match under Mowbray on Wednesday night when Dinamo visit Glasgow in the first leg of the Champions League third qualifying round.

Samaras told local reporters that it’s up to the manager to decide if he plays one minute or 90 but said that he fully prepared and ready to take on Dinamo.

He also added that he is never totally happy with my performance and he has never left a pitch and felt he was at the top of his game.

Samaras also said that it is a challenge for everyone to have a new striker here and if there are three of four good strikers the players will have to push on and prove that they are good enough to be selected by the manager.

He also said that last year, Celtic only had three strikers as he was out injured together with striker Jan Vennegoor of Hesselink.

However the player said that it is good for the boss to have four fit and quality strikers and hopes that he will be selected for the Dinamo game.

Fernando Morientes Reveals The Reason Why He Joined Marseille


Brad Friedel Has No Plans Of Retiring Anytime Soon