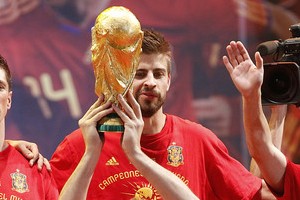 I must say that this video is rather disgusting and rude on the part of Gerard Pique.

For those of you who don’t know, Gerard Pique is the defender for Spanish club FC Barcelona and had recently won the 2010 World Cup with Spain.

This incident happened during Spain’s World Cup celebration parade where the players were brought in a bus while the fans gathered on the streets.

The players were obviously happy and jubilant after winning the World Cup for the first time but Gerard Pique was the most happiest.

It appeared in the video that he was too happy and decided to spit on an old man on the bus, probably one of the staff in the Spain World Cup team.

Check out the video and let me know what you think about Pique’s actions.