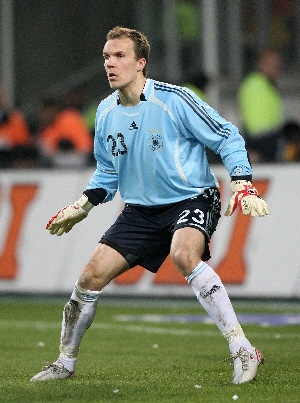 Hanover and Germany international goal keeper Robert Enke is being tested for tropical diseases after a mystery infection ruled him out of the Bundesliga match against Werder Bremen.

Enke, who has been picked to play in Germany’s three remaining World Cup qualifiers, was forced to pull out two days before the first, against Azerbaijan, suffering from an unknown infection.

The 32-year-old goal keeper is seen as a frontrunner for the Germany spot, ahead of Tim Wiese, Rene Adler and Manuel Neuer, as they seek to qualify for the 2010 World Cup in South Africa.

Hanover sports director Joerg Schmadtke told reporters that the diagnosis is still unclear diagnosis and the participation of Enke against Bremen does not make sense.

He also said that Enke’s blood has been sent to an institute specialising in tropical illnesses for checks.


The WAGs are Going To The World Cup!