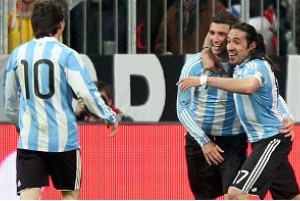 A goal from Gonzalo Higuain on the stroke of half-time earned Argentina a 1-0 win over a disappointing Germany in Munich.

The Real Madrid striker pounced on the first of several errors by Germany goalkeeper Rene Adler, who failed to justify his nomination as the national team’s new number one.

Argentina also hit the crossbar as they looked much stronger than Germany, who clearly have a lot of work to do before the World Cup starts in June, and a change in goalkeeper cannot be ruled out.