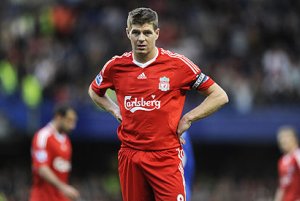 Gerrard was in doubt leading into the match after missing the league fixture at Sunderland on Saturday with a groin problem but Benitez decided to give him a start.

However, the inclusion backfired when Gerrard had to be substituted in the 25th minute and although the Reds went ahead 16 minutes later, eventually lost the match 2-1 to the French outfit.

He added that it was not a gamble to play Gerrard as he wanted to play and had trained normally for two games.

He also added that Gerrard was given the all-clear by the doctor and what happened was just bad luck.

Benitez revealed that Gerrard felt something wrong in his groin, and it was wise for him to come off.

Benitez did say, however, that injury problems were the main factor for the loss at the end of the day.

He said that Liverpool just had too many problems before and during the game.

He also said that losing Glen Johnson before the match, and then Gerrard and Martin Kelly during the match, was just too much to contend with.