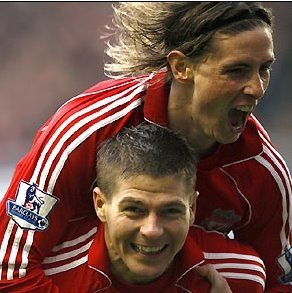 The Spanish striker has come under fire for a subdued start to the season and even manager Rafa Benitez has admitted that the striker is struggling to find form this season.

However Torres was among the goals at Upton Park scoring twice to see off West Ham in a thrilling clash and England international midfielder Gerrard reckons the doubters are only questioning his pal because he has set the bar so high.

Gerrard said that Torres has been playing well in his opinion.

Gerrard also added that people are talking about it, but those are the standards that Torres has set set.

The midfielder also went on to say that Torres is scoring goals and he was on fire today with the two goals for Liverpool FC.