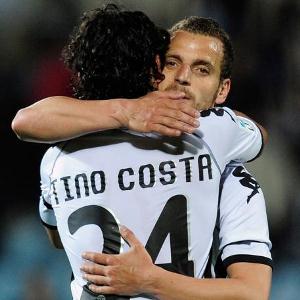 Valencia climbed above Villarreal into third spot at least for a few hours after Roberto Soldado struck four times against his former club Getafe in a 4-2 success.

But despite taking that lead into the interval, the hosts collapsed as Soldado gave a masterclass.

Soldado, who joined Valencia at the end of last season as a replacement for the Barca-bound David Villa, scored all four goals for Valencia.

Twice Juan Mata laid on Soldado’s chances, Jonas provided an assist for another, while the other goal Soldado made for himself after robbing a Getafe defender of the ball.

Adrian Sardinero netted a consolation in the 88th.