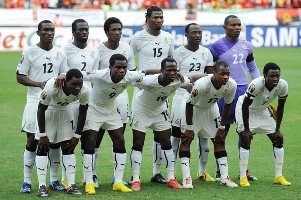 Kevin-Prince Boateng has been included in Ghana’s 23-man squad for the World Cup finals.

Berlin-born Boateng played for Germany at every level up to and including under-21, but he recently opted to switch his allegiance to Ghana after becoming frustrated with a lack of opportunities under Joachim Low.

And he survived the cull which saw coach Milovan Rajevac reduce his squad from 30 players to the required 23.

Boateng’s inclusion sets up a tasty encounter against Germany in Johannesburg on June 23.