Gianfranco Zola : 37 Points Should Be Enough For Safety 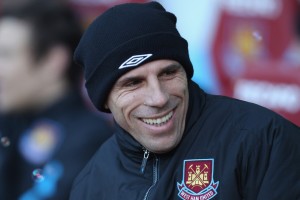 West Ham United manager Gianfranco Zola expects the safety points mark could be as few as 37.

The Hammers are 10 points shy of that target and now head into back-to-back away games at Chelsea and then Arsenal.

Zola recently told reporters that he thinks that the 37 point mark should be enough.

He added that he knows Chelsea and Arsenal are big teams and these will be big games for West Ham.

He then said that probably, no-one is expecting anything from West Ham but football is strange.

Zola then said that West Ham got a point in both games last year and that he is not going to go there already beaten because he knows football can have surprises.