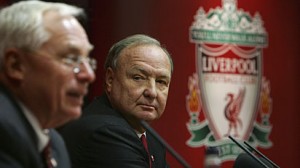 George Gillett has sparked another war with manager Rafael Benitez by claiming that the Liverpool manager is solely to blame for the club’s ongoing title misery.

Gillett insisted he and co-owner Tom Hicks should have had some return for the £128million they have invested in players over the last 18 months and the American owners pointed the finger squarely at Benitez for the lack of success.

Gillett told reporters that the money they have invested means Liverpool should be getting better and said that the club has not got any better and that they are not to be blamed. He went on to say that it is the manager and the scouting of the club.

He also said that there was plenty of money and if there is any complaints, the ins and outs of the club must be looked at.

Benitez splashed £40m this summer on Glen Jonson, Alberto Aquiliani and Sotirios Kyrgiakos but Gillett claims there was at least a further £12m available for team strengthening, with the Reds hoping to end their 20-year wait for the league title.

Gillett was speaking to fans group Spirit of Shankly outside the club’s training ground before the 6-1 thrashing of Hull last week.

Benitez has recently tried to avoid confrontation with the Reds moneymen following numerous bust-ups in the past. But these latest comments are sure to put the fiery Spaniard back on the warpath.