It has been reported that Manchester United U21 coach Warren Joyce is happy having senior players take part in their games. 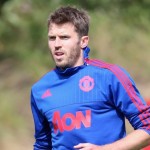 Louis van Gaal has been happy to give his senior stars minutes in the reserve team to keep or improve fitness levels, with Phil Jones, Victor Valdes, Michael Carrick and Robin van Persie among the high profile names to turn out last year.

“To develop young players they’ve got to have a mix,” Joyce told the Manchester Evening News.

“The manager has played some players when they need games and it’s good experience for the boys because they see proper pros, how they are, how they react, how they conduct themselves in the dressing room and on the pitch so I think that is a good education.

“It’s a test for them, what their attitudes like. It’s alright saying you’ve got a good attitude but you find out when you drop down to these games.

“If you don’t do it properly and focus for 90 minutes you can mug yourself off and that’s the difficulty for those boys.”