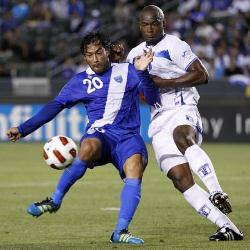 Guatemala held off Honduras to grab a 0-0 draw in their Gold Cup Group B opener despite finishing the game with nine men.

Defenders Gustavo Cabrera, in the 61 minute, and Henry Medina, in the 78th, were sent off but still Guatemala managed to deny their Central American rivals all three points during a spirited and physical match that went against the early Gold Cup trend of one-sided contests.

Goalkeeper Ricardo Jerez, who needed treatment on multiple occasions in the second half, kept his Guatemala defense organised but had to withstand some heavy Honduras pressure in the final minutes to secure the point.