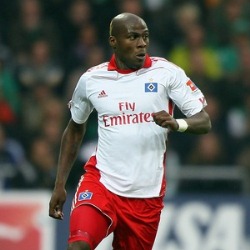 Hamburg defender Guy Demel has declared that he wants to return to the English Premier League.

The 30-year old fullback, who had a short stint with Arsenal in 2000, is available as a free agent and insists that he would love to come back to England.

The Ivory Coast international told skysports.com : “My wish is to go back to England and I would like to play in the Premier League,”.

“I have instructed my agent Willie McKay to find me a club in England and I know he is speaking to some interested clubs.

“I used to play at Arsenal but that was a long time ago and I am ready to go back.

“I am more experienced now and my desire is to return to England.

“I have played six years at Hamburg and had a good time there but I feel the time is right for a new challenge.

“Every player would like the opportunity to play in the Premier League where every weekend you play against top players and top teams and this is what I want.

“A lot of my Ivory Coast team-mates tell me how good it is play in the Premier League and it would be nice to play alongside them or against them.”