Henry Says He Is Still Loyal To Arsenal FC 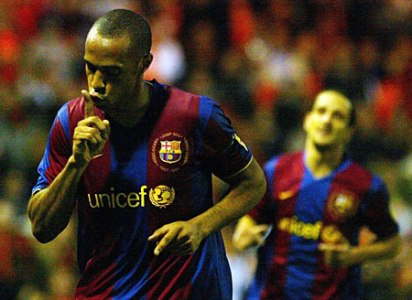 Barcelona and French international striker Thierry Henry has revealed that he has not forgotten his loyalties in England insisted that he would never advise anyone to sign for Arsenal’s fierce rivals Spurs.

Reports in the press claimed Henry had encouraged former team-mate Patrick Vieira to join Harry Redknapp at Tottenham but Henry told reporters that he is Arsenal through and through and that he would never advise anyone to sign for Tottenham. He also added that he can’t have Arsenal fans thinking that he is helping Tottenham in any way.

Henry also revealed that the truth was that he was talking to Spurs boss Harry Redknapp and Redknapp told him that he was trying to sign Patrick Viera from Inter Milan. Henry said he was very surprised because Patrick is like him and that he loves Arsenal.

The striker also added that he just said that Patrick would be a brilliant signing but he also made it clear that he would be shocked if the move happened.

Henry, who scored 214 goals for Arsene Wenger’s side, accepts Arsenal may struggle to reclaim the Premier League title given the strength of opposition they face and the sale of striker Emmanuel Adebayor to Manchester City.

But Henry insists Arsenal have the capabilities to replicate Barcelona’s success after they completed a domestic and European treble last season with a clutch of homegrown stars.


Fernando Morientes Reveals The Reason Why He Joined Marseille