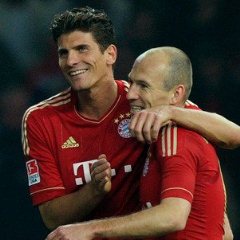 After scoring 14 goals in their previous two games at home to Hoffenheim and Basle, Bayern took their tally to a staggering 20 in three as Hertha meekly succumbed on home soil.

Thomas Muller made it 1-0 in the ninth minute before Robben opened his account three minutes later and then added another from the penalty spot in the 19th minute.

Mario Gomez converted another penalty to make it 4-0 in the 50th minute before Toni Kroos struck a minute later and Robben completed his treble with another penalty midway through the second period.

The win means Bayern remain second in the standings on 54 points – five behind Dortmund – while Hertha stay mired in the relegation zone after just one win in their last 15 games.