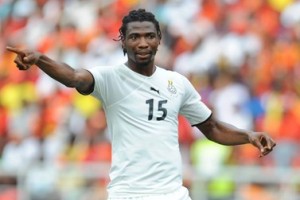 Hoffenheim midfielder Isaac Vorsah has said that he is flattered by interest from Premier League club Stoke city.

The 21-year old Ghana international confirmed the interest from the Potters and said he would love the chance to play in England’s top flight because of his towering physique.

The midfielder told reporters that “I am flattered by clubs in the Premier League, it is one of the best leagues in the world,”

“People claim I will be in my paradise in that league because of my stature, and physical attributes.

“With Stoke City, just because they have big and strong players through their team, I can also play the ball, let’s wait and see.”