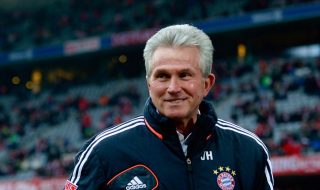 Bayern Munich find themselves in an all too familiar position at the start of the season after a poor run of results. The Bavarian giants have now gone four games without a win and things got particularly tense at the Allianz Arena before the international break commenced with a 3-0 loss to Borussia Monchengladbach.

It was on the 28th of September last year that the board saw fit to fire Carlo Ancelotti after a 3-0 loss to PSG in the Champions League and, on that occasion, they convinced Jupp Heynckes to return to a club where he is a cult hero. As it turns out, new manager Niko Kovac is under fire and has already had a few shots fired across the bow, with Bayern Munich president Uli Hoeness saying that the Croatian has ‘put his neck on the line’ for sticking to his rotation policy.

? Niko #Kovac: "The atmosphere in the dressing room is a positive one. Some are of course disappointed not to play, and we're also disappointed with recent results. Nevertheless, there is a real sense of unity in the team."#MiaSanMia #FCBBMG pic.twitter.com/KkpTVX5m5N

It’s hard to think of anything else Uli Hoeness could have said that would have undermined his manager as much as that. It doesn’t take a lot for the powers that be at Bayern Munich to become edgy and it wouldn’t be at all sensational to suggest that, if the Bavarians fail to get maximum points from their next two games, Kovac will get the bullet.
Would it be fair for the Bayern Munich board to sack him? You could argue that 90% of all sackings are unfair with patience no longer a virtue of any of the chairmen around the world. In Kovac’s case and being brutally honest, the 46-year-old is totally at sea with no help forthcoming.

That’s not to say he is a bad manager or inept tactician but managing this current Bayern Munich side requires the Midas touch and previous experience. The current Bavarian outfit is like an old door in an ancient house; you only need to know where to kick it for it to open.

Age is not on the side of the team and, out of the starting 11 that played in the defeat to Monchengladbach, five players were older than 29. There isn’t exactly a great deal of youth coming off the bench to inspire a comeback as 35-year-old Ribery showed when Kovac called upon the Frenchman to make an impact.

Is this team past their best? Without a shadow of a doubt they are but can they still be effective? With the right manager in charge they can but there is really only one man who knows how to get this aging side to blow teams apart and that’s Jupp Heynckes.

Rumour has it Bayern also have their eye on former Arsenal manager Arsene Wenger and, in some ways, that does look like a partnership that could work as Wenger is a linguist and fluent in German. The Frenchman is also renowned for his diplomacy, which is a crucial prerequisite when dealing with this current Bayern team. After having left Arsenal in the summer, the Gunners have adapted to life without Wenger quite well and even find themselves amongst the favourites for a top-four finish at 6/4 in Premier League betting.

A new broom sweeps clean and Unai Emery is doing just that but, despite his initial success and ability to turn the club around, you wouldn’t write Wenger off as a poor manager even if he was unable to do so. If Bayern were to go in for him they would be getting a manager absolutely desperate to win the Champions League.

It feels like the Bayern board are just waiting for the right moment to send Kovac packing and, if so, you wouldn’t bet against them calling up their old friend Jupp Heynckes before they did anything else. Could they twist Heynckes rubber arm just one more time? The board were unsuccessful last season when they tried to persuade the 73-year-old to stay on but you’d never say never when talking about this unique relationship.