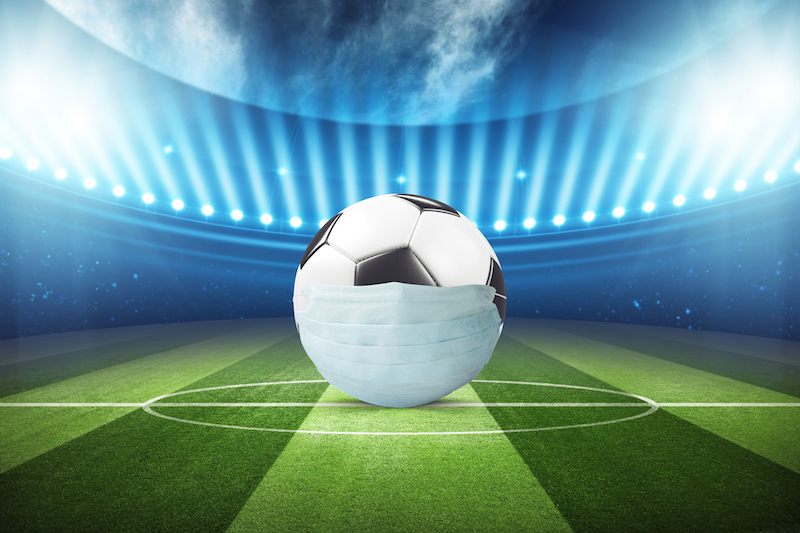 Exploring how the pandemic may continue to affect football, and alternatives for football bettors such as top online casinos and football video games.

Watching football has always been the nation’s favourite pastime, and many fans enjoy betting on it at the top online casinos and sportsbooks too. The COVID-19 pandemic has thrown everything into turmoil, but what might the future have in store, and what alternatives are there for fans who might suddenly find their league suspended once again?

Despite being the United Kingdom’s favourite sport by a country mile, football was dramatically affected by the pandemic for a long time. Question marks remained over whether or not the sport would resume and be able to continue its season, or whether it would have to be written off. The answer was different for different leagues.

In the upper echelons, in the Premiership and Championship, for example, the 2019/20 season resumed after the enforced break, with teams playing in front of empty stadia and promotions/relegations still on the line. Liverpool secured their first domestic title for decades, and Leeds finally got back into the Premiership. But the picture was different for the Northern Premier League, with the FA expunging all results and declaring the 2019/20 season null and void. This was naturally disappointing for sides such as the Yellows, who were in third position at the time.

Although football’s generally treated as a single sport the different leagues can operate in drastically different ways. There’s money by the truckload in the Premiership, with huge revenues generated via TV rights and sponsorship deals. This makes it easier for such clubs to bear playing in front of empty grounds. But at the more local level, clubs get a far higher proportion of their income from ticket sales, and absent crowds means lack of cash.

Best Online Casinos and Other Distractions

There’s always an off-season when fans have to find ways to pass the time whilst waiting for football to start up again, but it’s been a lot longer during the first year of the pandemic.

Many sports betting fans from the UK have found the solution online. Players have opted for no deposit bonuses from the top online casinos to play online and found a way to quench their sports betting thirst. Online sportsbooks offer the best odds for a wide range of sports, as well as esports. The top betting categories amongst UK players include football and horse racing. There are other alternatives as well in these online casinos, such as table games, and slots featuring unique themes, including soccer-themed, sports-themed and more. Additionally, the games are mobile compatible, meaning that you can play on the go as you watch your favourite team play on the TV.

Another good alternative is video games, whether that’s watching competitive eSports (which saw a surge in interest during the lockdown), or just whiling away the hours playing the latest video games. FIFA is a huge hit amongst games as are popular games like Cyberpunk 2077 and The Last of Us franchise.

For the more managerially minded, there’s also a range of football manager games, into which literally hundreds or even thousands of hours can be sunk. But we shouldn’t forget the most obvious distraction of all: playing football. Even if it’s more difficult during the pandemic, practising solo is still good exercise, and psychologists have learnt that exercise can also have positive effects on mood. Plus it’s a good way to shift Coronaspeck, as the Germans call fat gained from eating too much during the pandemic.

In addition to playing at top online casinos, football fans might be drawn to sports betting. Obviously that requires football to actually be held, and even here COVID-19 has an impact. It may be wise to bet against teams getting X points over a season or winning Y games, as this can happen due to either playing poorly or because the coronavirus pandemic interrupts the calendar again. As with online casino betting, make sure you have a bankroll you can afford to lose and only bet perhaps 2-3% of that per wager to help make your funds last.

Progress Made During The Pandemic

In May 2020, FIFA warned that the state of play for football would be very different, until a vaccine for COVID-19 was developed. Although some leagues resumed play, behind closed doors, many in lower leagues reliant on ticket sales found their seasons curtailed entirely.

FIFA called on teams and leagues to act in accordance with national and international guidance on healthcare, particularly aspects relating to mass gatherings which have clear implications for a sport that can regularly have tens of thousands in attendance at multiple events in a given week.

The uncertain path of the COVID-19 pandemic does mean that there’s a credible chance of seasons being disrupted once again due to localised outbreaks. Thankfully, this did not happened, and we can feel the same atmosphere we all missed as crowds are allowed back in stadiums – with a limited capacity.

A problem that fans and clubs share is that we just don’t know how the pandemic crisis will develop or when it will end. Many viruses mutate and they usually do so in a way that makes them less lethal, but the Spanish Flu of the early 20th century was a major exception.

The limited stadium capacity is a financial problem for clubs reliant on ticket sales. One possible way out of this is with an expansion of crowdfunding, with fans directly funding clubs via donations. However, the economic impact of the virus affects this too, with disposable income hit by the disease. There have already been some positive results in this direction, however. In May 2020, Warrington Town’s supporters helped the club to achieve its goal of raising £10,000 via crowdfunding on JustGiving, helping significantly to bolster the club’s finances which took an estimated hit of £70,000 from the coronavirus pandemic and resulting early end of the season.

It’s not clear what the future holds for football, but if the worst should happen and seasons get disrupted there are plenty of ways for fans to distract themselves in the downtime, from online casino betting to sinking hours into football video games.


The very best football games for your smartphone