Hugo Lloris has declared that Tottenham can build on their 1-1 draw at Arsenal. 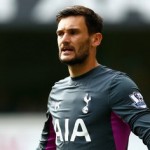 The French international goalkeeper made three fine saves — the best to deny Per Mertesacker’s point-blank header just after the Gunners had equalised — as we dug in defensively to secure a point.

The 27 year old said : “It was a really tough game and we showed a great spirit,”.

“We know that we could improve with the ball but defensively we were strong.

“Arsenal were strong, especially in the second half but defensively we had a great display and we deserved a point.

“We were a little under pressure before the game because of the result against West Brom last weekend and we needed to come away from here with something.

“We were rewarded for our fight because we put a lot into the game and if we keep this kind of spirit we can do a lot this season.”