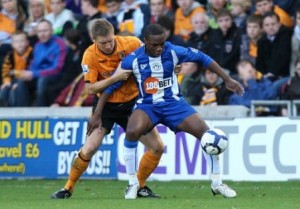 Hull City moved out of the bottom three of the Premier League after beating Wigan Athletic 2-1 at the KC Stadium.

Second-half goals from Jan Vennegoor of Hesselink and Geovanni were enough to seal only Hull’s second home league win of 2009, with substitute Scott Sinclair scoring a late consolation for the Latics.

The result lifts Hull out of the relegation zone overnight. Two of the three sides below them, Fulham and West Ham, play each other at Upton Park on Sunday.