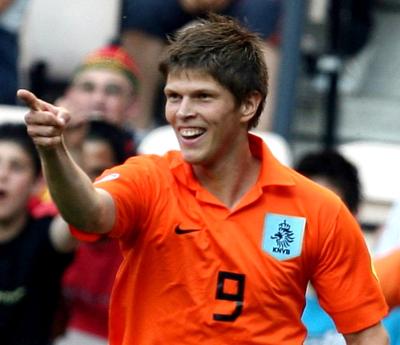 Dutch international striker Klaas-Jan Huntelaar has completed his move from Real Madrid to AC Milan for an undisclosed fee, thought to be around the region of £12.8 million.

It is said that the Netherlands striker has put pen to paper on a four-year deal tying him to the Rossoneri until 2013 and he will now join Pato and Ronaldinho in the Milan attack.

A statement from club website said that Klaas Jan Huntelaar has officially become a Milan player after passing the medical and the Dutch striker has signed a contract which ties him to the club until June 30, 2013.

Huntelaar found himself surplus to requirements at the Bernabeu following Madrid’s summer spending spree that has seen the likes of Kaka, Cristiano Ronaldo and Karim Benzema brought in.

German club Stuttgart and Premier League club Tottenham had also expressed an interest in the 25-year-old, who struggled to make any kind of impact during his six-month spell at Madrid.