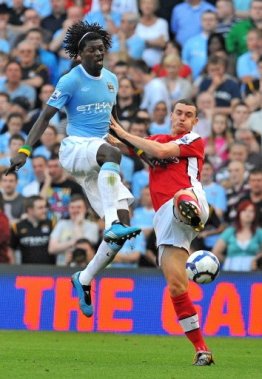 Manchester City striker Emmanuel Adebayor has revealed that there was no intention to cause hurt in his clash with Arsenal striker Robin van Persie yesterday.

He told reporters that he was trying to kick the ball and that he saw Van Persie tackle in front but did not have any time to get out of the way.

Gunners boss Arsene Wenger responded by saying that he does not want to assess the performance of Adebayor as he is not an Arsenal player.

Wender also said that he has not seen the incident involving Adebayor and van Persie, but said that Adebayor’s celebrations were not of the biggest elegance and that it was out of his control.


Juventus Must Wait On Manchester United For Giuseppe Rossi