Reports are out claiming that Cristiano Ronaldo has pledged his commitment to Real Madrid. 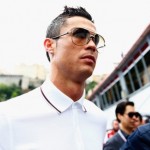 The Portuguese international superstar took time out from his holiday to call for an end to speculation over his future.

“I would sincerely like the false reports to stop and to be left a little in peace,” said Ronaldo who is on holiday in Miami.

“Reports that I have sought to create conflicts between myself and Real Madrid are absolutely false,” the 30-year-old was quoted as saying in A Bola on Saturday.

“I am very happy at the best club in the world and very focused and confident of a new season full of successes.”