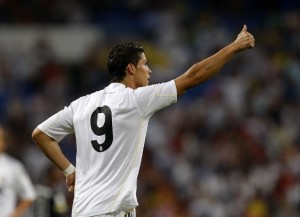 World football superstar Cristiano Ronaldo has revealed that he still loves his former club Manchester United and watches them on TV whenever he can.

The Portuguese winger moved from Old Trafford to Real Madrid this summer in an world record £80million deal and despite that switch fulfilling a boyhood dream, Ronaldo has said that he still harbours affection for his old club.

Ronaldo told reporters that he tries to watch Manchester United’s matches on the television and that he still like to know what is happening at Old Trafford.

He also added that despite now being at Real Madrid, he is always happy when he finds out that United have won.

Ronaldo has wasted no time getting into the groove with his new team, becoming the first Real Madrid player to score in his first four league games for the club.