I Will Give Everything For Perth Glory! – William Gallas

William Gallas has declared that he will give absolutely everything for his new club Perth Glory after officially joining the A-League outfit.

The 36-year old former France international defender has been criticised by some for his decision to shift to Perth but has made it clear that he plans to take his one-year deal with the Glory very seriously, just as he did during his decade-plus stint in the English Premier League. 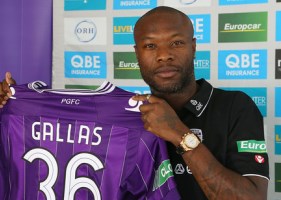 “When I was with Chelsea, Arsenal or Tottenham, I always played with my heart. I always gave everything,” Gallas said. “That was very important for me.

“When I played for a club, I played with my heart. Now I play for Perth, so I will give everything. The attraction (of coming to Australia) is I have a new challenge. It’s to win a trophy with Perth Glory. That’s very important for me.”

He added: “Every day I was training with a fitness coach when I was in France or London.

“It’s important for me to stay fit. Some people said I put some weight [on], but that is not true. I was really proficient … to be ready for my new club. So now, I’m ready. Some players play until 40. I hope I could play until 40. I’m ready for that challenge.”